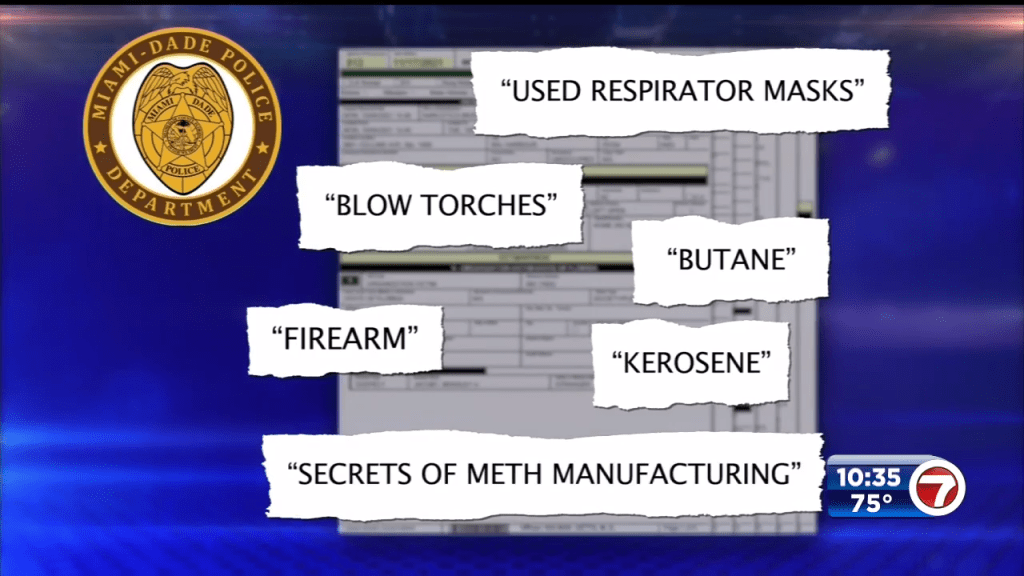 It is the South Florida meth lab mystery in a luxury high-rise condo.

Now 7 Investigates uncovers new details including who police say may be behind it.

The discovery in October at Majestic Towers in Bal Harbour brought in the bomb squad and triggered the evacuation of three floors.

Now for the first time Miami-Dade Police detail exactly what was found inside the 15th floor condo unit.

Used respirator masks, blow torches, butane and kerosene fuel, a gun found in a shoe box and even a paper describing the secrets of meth manufacturing.

Alberto Febo, DEA Senior Forensic Chemist: “Red phosphorous, also known as red p. That’s what they use in flares. That can ignite any of these flammable liquids.”

Alberto Febo is a Senior Forensic Chemist with the DEA.

While the agency said they cannot comment on this ongoing investigation, they did allow us into their drug testing lab to emphasize the potential dangers of producing meth like this.

Alberto Febo: “You can create a very flammable, a very toxic environment.”

Karen Hensel: “If a meth lab had exploded in a high rise, what kind of damage does that do to the other floors in the other units?”

Alberto Febo: “It can cause a great deal of damage. We’ve seen methamphetamine labs that destroy whole houses. So you could actually wipe out an entire floor, even floors, for sure.”

Read Also:   First Manufacturing Hub grant awarded on day one in all AMW

For the first time Miami-Dade Police are naming a suspect, Bradley Jacoby.

Their report says a packing slip addressed to him was found in the condo with one quart of technical grade methanol purchased.

Bradley is the 39-year-old son of Stephen and Iris Jacoby, the couple who lived in the condo.

The couple moved out of the condo four days before authorities moved in.

David Winker, Attorney for Stephen and Iris Jacoby: “Unequivocal denial none of this was in the apartment when they left.”

And while their son is facing felony drug trafficking charges in a separate 2019 case, no one has been arrested or charged in this nearly five month old case.

That is something Bradley Jacoby’s attorney told us speaks for itself.

Meanwhile, while a meth lab explosion is a worst case scenario the DEA says the chemicals also pose health risks.

Karen Hensel: “What if I lived next door? Would I be in danger?”

A potentially dangerous situation for those living here at Majestic Towers, and although we have been able to unravel more about the case, just how this meth lab mystery ends remains to be seen.

If there’s something you think we should investigate — call or email us: 7investigates

Copyright 2021 Sunbeam Television Corp. All rights reserved. This material may not be published, broadcast, rewritten or redistributed.

Join our Newsletter for the latest news right to your inbox